Adjustable Height for All Beds

The Ramp You've Been Searching For

When it comes to a ramp for the bed, larger dogs have been overlooked for far too long! Other products lack features like adjustable-height, safety rails... or are just too narrow or not strong enough.

Well we fixed all those things and more! Our large bed ramp was designed with large dogs in mind, but can absolutely be used by medium and even small dogs as well (especially if you have more than one!).

We know looks are important, too. Our ramp is made of solid hardwood, handcrafted in North America, and comes in 5 beautiful color options to match your bedroom. Our large dog ramp for beds is is made of strong, sturdy, and beautiful furniture-grade solid hardwood with features that will keep your dog safe, and finishes to match your bedroom.

This bed ramp was designed with the medium and large dogs in mind, such retrievers, German shepherds, basset hounds, corgis, etc. Especially when these dogs enter their senior years, or have arthritis or other health conditions, or perhaps are just short like basset hounds, a strong, sturdy, and wide dog ramp for the bed and for these bigger breeds just didn't exist - until now!

However, it's not just for the larger dogs. Many customers with several+ smaller or medium dogs opt for this bed ramp for its wider platform and stronger build when compared to our small bed ramp for dogs.

No exaggeration! It's fantastic! Our 12 y/o Lab and 11 y/o GSD both have hind end mobility issues and were having difficulty getting in bed at night. I did maybe a 15 minute training session with each dog, and they both immediately started using it. I need to work with them on using it to get off the bed more, but that's on me. It's sturdy, stable, well made and definitely worth every penny! I hate I didn't order it sooner!

A
Ashley B
Saves my back!

I really love this ramp! It was so easy and quick to put together and I could tell right out of the box this is a high quality product. It is nice and sturdy too. My dogs already used a carpeted ramp for the couch, but I have to say I love the rubber grip on this ramp so much more. My 4 dogs are so much more confident going up and down this ramp. Especially my 10 year old frenchie! I have 2 English Bulldogs both weighing about 35 lbs and 2 French Bulldogs. We got the large dog ramp so more than one can go up the ramp at once, and it has been perfect for us. I got the walnut finish which matches my furniture as well. It’s also so nice not having to pick up 4 dogs every night and place them on the bed. My back thanks you!! :) 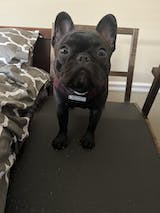 Our first fur baby’s life was extended because of this ramp. After Jake went over the rainbow bridge our rescue Bear was equally impressed with the quality of this ramp to sleep me his new forever parents. This is the best ramp on the market!

My 75lb, 14 year old dog has been using horse mounting steps to get up to my high bed for several years. The last year, he has found the steps increasingly difficult and has stumbled and almost fallen more than once. I got the large ramp and with only a couple days of training, he was using it without any difficulty. It has been much easier for him than the steps were. It was easy to set up and training took effort but he got used to it quickly.

I am so mad at myself that i looked at this ramp for 2 years before i purchased. The best thing ever! My basset hound (stubborn and hard-headed) caught on really quick in one afternoon and one night (very treat motivated lol). I just can't say enough good things about this ramp. I was worried about her jumping and hurting her back very common in bassets and i want her to live as long and healthy as she can and anything i can do to help, I'm in. Totally worth it! See pics below training with the couch before we moved it to the bed. 😍 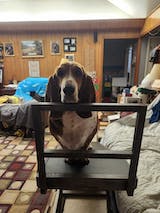 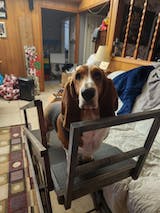 My sweet senior girl is not able to jump up on my bed anymore so I invested in her needs. I researched various ramps and choose the DoggoRamp bed ramp. We are extremely pleased! Delivery was fast. The ramp is well made and sturdy. I especially love the rubber grip platform, which is one major reason why I chose this ramp. This bed ramp is well worth the purchase

C
C.
Wish we had this years ago!

Our eleven year old doggo loves his ramp! He can get on and off the bed to be with his people as he pleases. Before the ramp, our dog had flare ups of arthritis in his upper back, likely from jumping off of our tall bed, but since getting the ramp he’s able to be a more active and independent old pup. It’s very sturdy, I even walked up and down it myself when we first got it and my dog followed suit. 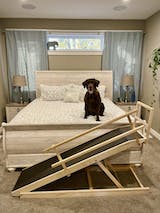 My 80 pound mixed angel was having a hard time getting on and off the bed. He kept trying but looked like it hurt him. I got this ramp and it took him a while to choose to use it. He uses it now when he’s tired but still likes to prove that he can jump up on the bed. My tiny chihuahua uses it every time. I’m glad it is sturdy and will last a long time and can work for big or small dogs.

Doggo Ramp is finely crafted furniture. I bought the large dog build to pass on to my family and their pets. Easy to purchase with no charge for shipping and it arrived quickly. We need more American craftsman with customer service to match Doggo. We’ll done!

S
S.M.
Be Patient and they will come.

This is my second ramp I purchased, the first one was for 150 lb dog, it was $179.00 but it was not going to last and it was not sturdy so I returned it.
You know you really don’t want to spend $399, but I did, put it on PayPal, had 6 months interest free option to pay, When I first received this unfortunately, I did not read the direction, my 133 lb extra large yellow lab wanted nothing to do with it, so then I decided to look at the instructions on how to get your dog use to i

It said to lay it flat next to your bed, I did this and it gave him just enough height so he didn’t have to put too much pressure on his front paws to pull himself up, so it stayed that way for a month, I have 2 kittens and one has neurological problems so I put the ramp up so he didn’t fall and hurt himself, when he had a spell, so the kittens ran up and down the ramp, and soon the dog followed.

Now it is the only way he chooses to get up and now he is up and down constantly…..Now this is the most important reason why I spent $399 for a well built ramp, jumping up on the bed nightly, the pressure my dog was putting on his front legs would eventually cost me thousands in surgery, and painful for him, and painful for me not letting him out of a crate so he would heal from the leg surgery. It was the right thing to do to ensure the health of my dog……and the kittens too. 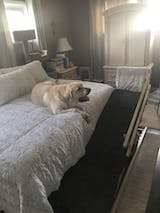 What is the shipping time and cost?

Shipping is 100% free for all orders to mainland USA & Canada.

Orders to the USA ship from Tennessee, and ship same day if order placed by 4pm ET, and take only 2-4 days to arrive anywhere across the USA.

Orders to Canada ship from Ontario and ship same day if order placed by noon ET, and take 3-7 days to arrive anywhere across Canada.

How do I train my dog to use the ramp?

In each product box, we include our expert-developed Training Steps Pamphlet which has been proven to be super effective and make a huge difference, especially for dogs that are more timid of new things. Plus, if you still experience any challenges, you can reach out to us and our time will personally guide you with training tips and coaching for your specific dog and scenario.

If your ramp doesn't work out for whatever reason, we happily offer a flexible, hassle-free 60-day return period (read full policy here). If dog training/use is your issue, we always appreciate the opportunity to help. Reach out to us anytime at doggoramps@gmail.com.

Is there a warranty?

Yes! We stand behind the quality of our products, and proudly offer a 1 Year Manufacturer Warranty on all our products. Read the full policy here.

I'm not sure which ramp to choose?

It first depends on whether you're looking for a couch or bed solution.

If you're looking for a couch solution, see our couch ramp which works for all dogs up to 150lbs.

If you're looking for a bed ramp, then it depends on the size of your dog. If you have a small dog under 40lbs, see our small dog bed ramp. If you have a dog over 40lbs, OR if you have several or more smaller dogs, choose our large bed ramp for the higher weight limit and wider platform.

Still have a question?

Chat with a hooman - they usually have most of the answers!