The Ramp You've Been Searching For

When it comes to a ramp for the bed, larger dogs have been overlooked for far too long! Other products lack features like adjustable-height, safety rails... or are just too narrow or not strong enough for a big dog!

Well we addressed all those things and more! Our large bed ramp was designed with large dogs in mind, but can absolutely be used by medium and even small dogs as well (especially if you have more than one!).

We know looks are important, too. Our ramp is made of solid hardwood, handcrafted in North America, and comes in 5 beautiful color options to match your bedroom.

Even larger dogs can benefit from a ramp when it comes to getting on and off the bed, especially for our senior pups, those with arthritis or health conditions, or shorter dogs like basset hounds! But it's not limited to larger dogs. If you have several smaller dogs for instance, our large ramp is also a great solution!

Sales tax is already included in the sale price you see on the website for any regions where we have an obligation to pay sales tax.

I've been looking for something to get my dogs up to their grooming table. The use of those plastic, narrow steps sliding on the floor was such a hazard for my dogs. But then I came across this DoggoRamp and decided to give it a try and see if it works even though they state use for beds. WOW! FANTASTIC! So glad I bought this. The product is well made, sturdy and well balanced. Fits perfectly with my table and works like a charm. My Sammies don't have to worry or have fear getting up and down off the table anymore. AND customer service was excellent. Jesse was very professional, knowledgeable and nice to work with. So don't hesitate to buy this product. Just get it..... You'll be glad you did. 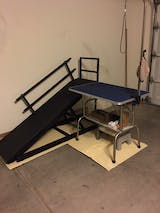 We have 2 mini dachshunds, and we worry about their little backs (spinal problems). Dachshunds are very prone to intervertebral disc disease, and with this ramp, we can now no longer worry about them getting on and off our bed. We have a very high bed, and this ramp is perfect! We were also lucky because they happened to have it in the color that matches our room. We are so pleased to have our ramp and worry just a little less. 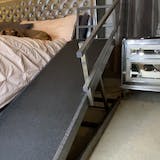 I received Jenny's ramp on Dec. 8th and I absolutely love it. My fur baby (Jack Russell Terrier) is 16 years old and can't jump like she used to onto the bed. The ramp is such a wonderful Blessing for my dog being able to go to the bathroom whenever she wants to go.

I bought the large because I have multiple dogs ranging from 7-65 pounds, and I wanted to make sure it was stable and safe. The littlest one has benefited the most so far and you’d think it was bought just for him and not his older bigger bros.
I cheated on the training- they started using it day 1. Aussie still goes up a
1/2 way them jumps on the bed, but that better than a 30” jump.

I have one suggestion:
The large ramp does not need to be tied, that was a bonus. My bed is designed where there is no way to tie the ramp to the bed.

I have stained concrete floors, so it would move, not a lot, but a little each time adds up. There was also a bit of a wobble. Not a lot, but it was at the top end, so a concern. I put it on a non slip bath mats to see if that would all stop. It did.

I bought pads for the feet because they are hard plastic- not a softer rubber, that makes me think the assumption is every one has carpet. That stopped the ‘slide’.
Suggestion is to add (6) of these to each order- just in case.

I bought an area rug and that stopped the slight wobble.

I’m happy and the boys have more freedom and independence so they are happy. Ramps looks good. Easy to move and adjust. Worth the price paid. 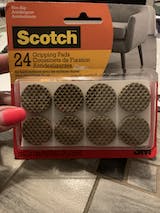 I recently bought a new bed that is much higher than my last. My 12yr old dog, Shiro, has no idea how old he is. He still jumps up and down no problem, but I was concerned about the height, his joints from repeated impact and the slippery hardwood he's landing on over time, so I purchased this ramp preemptively. Received very quickly and setting it up was easy. Looks great, more than enough height, and both dogs (I also have a 15mo old psycho girl dog, Dani) took to it immediately - meaning it didn't freak them out at all. Dani mostly uses it to get in & out of bed only if I happen to actually be in the bed blocking her way lol. Shiro is more consistent with using it either way, which I'm happy for. Very solidly built too - doesn't wobble. I think this ramp is going to last a very long time!

We've had our Large Bed Ramp for two months. Our two middle-age German Shepherds, one of which is "anti-ramp", took to it quickly. The ramp is extremely sturdy and wide, which helped change our male's mind about ramps. The design and materials are first rate. So is the craftmanship, fit and finish. We are so happy we found this ramp!

Shout out to Dean the Bassett for his promotional video! We tried other ramps but this one is the Winner! Our elderly Bassett has arthritis and took to this ramp with rails and a perfect footing very quickly. She loves it and our backs love it!

G
G.
Great for my Golden

Recently I purchased the large ramp so my Golden Retriever can get on my bed . My bed is 35 inches high and has a white bed frame. The white ramp looks good with it . My pup is now 5 months old and figured the ramp out very quickly. Very happy to have found this

K
K.K.
I've been waiting for this!

Ever since I saw the small Doggoramp and how it worked, I hoped for one for bigger dogs. So when I saw the Bigdog ramp come out, i jumped on it immediately! I have a 10 1/2-year-old, extra-large cattle dog (70 pounds) named Carter. He has been getting up and down off my bed by jumping on a bench and then onto the bed, but lately I've noticed that he 'stalls out' when he's on the bench and seems hesitant to go further, resulting in him just sitting there while I try to encourage him to go up or down. I suspect it's because the bench is slippery and awkward. I've been looking for a ramp for him, but none of them seemed to fit our needs - until now! He took to the Doggoramp immediately and after just a few days of training he is going right up and down it and seems to enjoy it! I've got it set a bit low, but may raise it more in the future. As a bonus, it's very solid and good-looking. Looking forward to years of use!

K
K.S.
I have been waiting for months for the Big Dog Ramp!

I had previously purchased the couch ramp so I knew the quality of the product. This is very sturdy and well made ramp. They do an excellent job on the wood finish, The best part is that it is fully assembled right out of the box! You just select the height and it is ready to go. It takes about 5 minutes to attach the side rails. My female dog torn her ACL last year and was unable to climb or jump on my bed. She is so happy that I bought the Big Dog Ramp. I have a senior cat and it makes it easier for her to get onto my bed too. 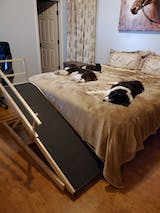 What is the shipping time and cost?

Shipping is 100% free for all orders to mainland USA & Canada.

Orders to the USA ship from Tennessee, and ship same day if order placed by 4pm ET, and take only 2-4 days to arrive anywhere across the USA.

Orders to Canada ship from Ontario and ship same day if order placed by noon ET, and take 3-7 days to arrive anywhere across Canada.

How do I train my dog to use the ramp?

In each product box, we include our expert-developed Training Steps Pamphlet which has been proven to be super effective and make a huge difference, especially for dogs that are more timid of new things. Plus, if you still experience any challenges, you can reach out to us and our time will personally guide you with training tips and coaching for your specific dog and scenario.

If your ramp doesn't work out for whatever reason, we happily offer a flexible, hassle-free 60-day return period (read full policy here). If dog training/use is your issue, we always appreciate the opportunity to help. Reach out to us anytime at doggoramps@gmail.com.

Is there a warranty?

Yes! We stand behind the quality of our products, and proudly offer a 1 Year Manufacturer Warranty on all our products. Read the full policy here.

I'm not sure which ramp to choose?

It first depends on whether you're looking for a couch or bed solution.

If you're looking for a couch solution, see our couch ramp which works for all dogs up to 150lbs.

If you're looking for a bed ramp, then it depends on the size of your dog. If you have a small dog under 40lbs, see our small dog bed ramp. If you have a dog over 40lbs, OR if you have several or more smaller dogs, choose our large bed ramp for the higher weight limit and wider platform.