*We currently ship to many international countries, but please be aware if ordering from outside the USA or Canada, additional shipping charges and duties may apply.

Sales tax is already included in the sale price you see on the website for any regions where we have an obligation to pay sales tax.

I chose this company due to the video provided, the attention to detail, and the quality of the wood used. I was so pleased when I received it! Today I ordered the bed ramp!! Our dachshund was easily trained using the guide that Doggo provided......and fastest shipping around!! Thank you!! 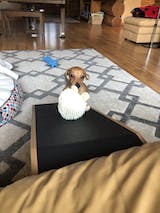 I recently purchased the couch DoggoRamp and was very impressed with this product. The quality is superb! It is visually appealing and looks perfect in my living room. Best of all my “babies” took to the ramp right away.

I have another ramp from another company, This one is better, the wood quality is a furniture grade, even then natural has been sanded and polished with the hard edges knocked off and visually something acceptable for the living room and company seeing, the hardware is good quality and the everything works smoothly. When the one for the bed needs replacing I will be getting the bed ramp.

We purchased the couch ramp for our elderly pup to be able to get up on the bed. It arrived very quickly with great training suggestions to get her accustomed to using it. Within 2 days she had nailed it and is now so proud of herself that she can now get up and down like she used too! The ramp looks beautiful and our son (who is a carpenter but of course too busy to build one himself) was totally impressed with the quality of this product. If you are looking for a ramp for your pooch that looks like a lovely piece of furniture, is solid and well constructed look no further. There is a lot of junk out there. So glad we bought this.

Very sturdy, well made ramp. I only wish it had a rail option. Mine all like to jump off the side. If they're on the couch and you rattle something in the kitchen.... well, forget the ramp. I guess that's a Doxie.

Ordered the DoggoRamp on Wednesday, received it Friday - Super Fast! Great packaging, no assembly required -Great! Coaxed Little Lotti up and down the ramp twice with small treats. She sniffed the ramp, then easily followed the treats up and back down. An hour later she walked to it, sniffed again, then put both little paws on it - turned her head to look at me. I walked over and only touched her butt, no push or pressure, and she ran up the ramp. Easy Peasy! She’s been using it since then, so she readily accepted it as a natural part of her life. Since she was born with luxating patella, this has been awesome for her. Before she was using a child’s 2 stepup which was becoming very difficult for her. Now she trots up and down the DoggoRamp happily. Thank you, Ryan, for designing and sharing your ramp with us! This is the best thing I’ve ever bought for my little girl. BTW, my other Yorkie and mini Doxie also use it, happy fur babies, happy home. 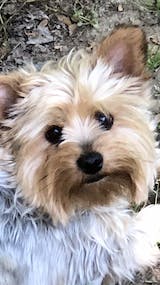 Lightening fast shipping. Couldn’t believe how fast our product arrived. We ordered on Monday and our ramp was delivered Wednesday morning!!!! Packaged well. Very impressed with the quality and construction. We have several other ramps and the DoggoRamp is far better quality. Thank you guys for producing a superior product. 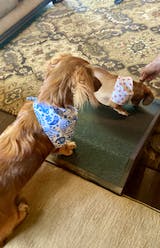 I got the Couch Ramp for my Wire Fox Terrier's 14th birthday last week and he just loves it. He took less than a day to learn how to use it, initially only used it when I was sitting in the couch, now uses it all the time whether I am around or not. I wanted to give him back the independence of being able to get on the couch without assistance, since he's getting on in years. This ramp was perfect for that. Did I mention it looks great, too? I chose to get the natural wood finish, so the maple hardwood used to construct the ramp looks great on my maple hardwood floors. It's really well and thoughtfully designed and the construction is very sturdy. I've already told several friends about these awesome ramps. Thanks!

We have 2 Dachshunds, a 10 year old mini, and a 2 year old standard Wire-haired. We got the ramp as we always had to lift the mini up onto the couch and we were getting concerned about his back when he would jump down. At first they wanted nothing to do with it so we just left it set up by the couch and after a couple of weeks, the mlini tried it out on his own so we raised him up and after a bit more time he tried going down. The Wire-hatred has also been trying it out. This is a very sturdy ramp and is very stable. I would definitely recommend it for anyone who has a Dachshund.

I have a 12 year old dachshund, Cooper, who has been a jumper since he was a puppy. I could never stop him from jumping. He had some back soreness several months ago and thought of getting this ramp, but didn’t want to spend that much on something he might not use. He is very stubborn. I finally decided to order the Doggo ramp in early May. I was excited when it came and put it out to let Cooper get used to it.

The following day he was in extreme pain. Turns out he has disc disease with 3 bad discs. He was put on several meds and I had to keep him calm and no jumping for 3 weeks. As that would interfere with my seeing if he’d use the ramp and maybe have to return, I contacted customer service. I got a very nice response from Jesse who extended the time frame for me to return it.

After 3 weeks Cooper finally reached a point where I felt I could try and get him used to the ramp. I got him to sniff it and take a treat off it as the flyer suggested. I then tried to get him to use it in the low position. He was having none of that. He just shook or would bark at the treats I put on it.

I again contacted Jesse and was given a link showing Ryan getting Crusoe used to the ramp. It was so helpful. I realized I wasn’t doing it properly. So I tried it with Cooper’s treats. Still not cooperating. Then I remembered that he loves cheese and will do anything for it. Armed with small pieces of cheese and small treats I did what was shown in the video.

SUCCESS!!
After 45 minutes and lots of cheese and treats. He is going up and down with no hesitation. He loves that he now can get up and down on his own. I did have to put pillows on the outside of the ramp and on one end of the sofa as he was tried to jump on and off the ramp. I am hopeful that eventually he will no longer want to do that and I can remove the pillows.

If you are considering buying this but not sure your dog will adjust. Get it! Cooper is proof that with a bit of work, patience and praise they will use it.